The thought role in performance | YouCoach Skip to main content

The thought role in performance

The thought role in performance 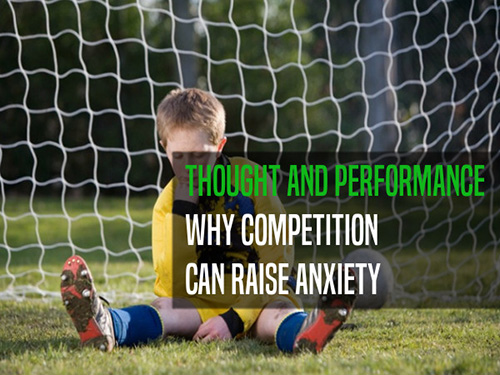 In our previous article we provided a definition of performance anxiety pointing out that it depends on both a biological predisposition and the psychological aspects of the athlete, in particular his way of thinking and of interpreting game situations. Anxiety levels affect and are affected by these factors.

In the present article we examine an aspect of a way of thinking affecting anxiety: self-evaluation processes.

A competitive situation has also a subjective component determined by the player himself and his psychological features that influence his perception, evaluation and acceptance of the competition.

In this case, evaluation plays a significant role in anxiety reactions. When a player is going to face a match, his mind performs two kinds of evaluation, concerning the perception of one’s abilities and the match, respectively.

This self-talk is strongly affected by past experience. Anyway, it is a dynamic process, in that it undergoes changes as a consequence of the outcome of new matches.

Luca is a 12 year old boy. He began to play football at the age of 6, in the team of his town where he still plays as a midfielder. At the beginning he had great fun and light heartedness in any kind of situations during both the practice sessions and the matches. The coach often scolded him for not being engaged enough in the game, staying too still and being “not right in the head”. His father often went to watch him play and usually agreed with and supported the coach. In spite of the remarks Luca had fun and did not worried about it. 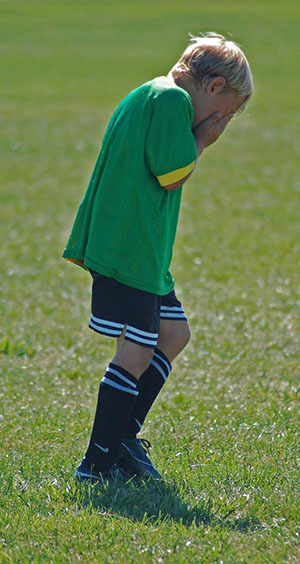 As Luca grows up, he begins to observe his teammates and make comparisons. He realizes that the coach (always the same) leaves him on the bench more often than the others. The experiences on the field he remembers most are predominantly negative ones, two in particular: when he did not succeed in stopping an opponent who scored the decisive goal that made his team lose the match for the qualification for the regional championship final, and when during a match an opponent managed to steal the ball from him and the coach scolded him screaming in front of his friends. Today the remarks addressed to him during the match bother him or make him feel ashamed. His friends often come to watch him play, as do some local devotee spectators. He begins to think he is not a good player, and his teammates are quicker and brighter. He often feels his legs blocked. He begins to be afraid of making mistakes on the field and think “I’ll look so bad if the coach yells at me in front of everybody” or “what an impression if they steal the ball from me."  He thinks he is too slow and not skilled enough. Luca begins to evaluate his abilities. Even the matches seem to become all difficult, each one seems to show some difficulty: too hot, too cold, too strong opponents. Luca begins to evaluate the matches, often in a pessimistic way.

A few days before the match he begins to hope he is not selected or he'll be left on the bench longer. The match begins to worry him and he often imagines that if he plays he will make a mess (“I’ll look terribly bad”). As the match comes up he ruminates on his past unsuccessful experiences fearing to repeat them. These thoughts bring about a state of anxiety that he suffers throughout the pre-game time and the match time itself.

On the basis of his past experience Luca begins to evaluate his football abilities as “low” and the difficulty of the match as “high”, and anxiety arises.

The “amount” of anxiety is affected by the distance existing between the perception of one’s abilities and the feasibility of the match.

In both cases the performance is likely to be impaired (see Yerkes and Dodson’s curve mentioned in our previous article describing the relationship between anxiety and performance). 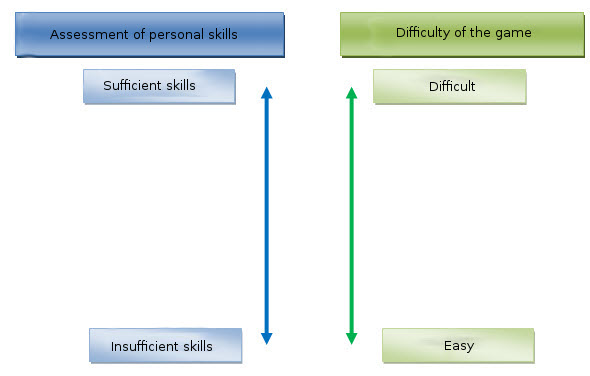 Coming back to our example, it is possible that Luca is undergoing distortion of thinking and reasoning mistakes that drift him away from an objective evaluation of the competitive situation and lead him to an interpretation of his own.

In the two forthcoming articles we’ll discuss these aspects, i.e., distorted thinking at first and then reasoning errors.