Goalkeeper and defenders: an essential synergy in modern football

Goalkeeper and defenders: an essential synergy in modern football 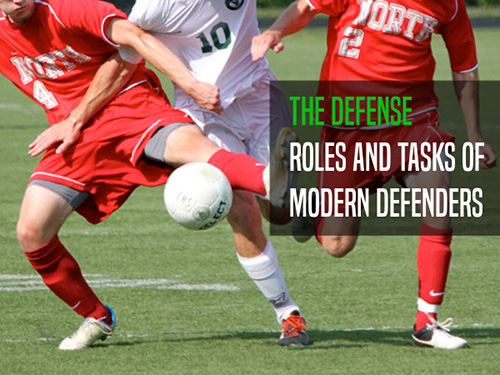 In this article we are going to examine the defensive unit including defenders and goalkeeper regardless of kind of module, in order to analyse individual characteristics and tactical tasks in the two phases of play.

The role of the defensive block has changed over the years. First of all, a different defender style has been created. The game evolution has brought about a different demand for individual skills: not only defending but also attacking skills. Today outside defenders are able to play low or high thanks to their skill in 1v1 in the two phases of play. The role of the defensive midfielder has also changed, today he must be skilled also in play construction and possession. When in possession, the defensive unit seek to move the ball rapidly so as to catch the opposition while “unprepared” but, at the same time, the unit are ready to compensate for a negative transition by ensuring that preventive covering is always provided. In the defending phase the higher play speed demands greater attention to be paid to the distances between players, and marking is also being attentively studied by technicians.

The goalkeepers’ role has also changed during the past few years. Today footwork is very important because it improves the goalkeeper’s balance and reactivity. A reactive goalkeeper has a better chance to contrast the attackers’ speed.

Under a tactical point of view, the goalkeeper’s position in the two phases of play, possession and non possession, and in transition is more aggressive today than in  the past. The goalkeeper increasingly seeks advance and often he is also involved in game construction. Physical stature has increased considerably, in the last U23 Football World championship the average stature of goalkeepers was 1,93. As concerns the psychological aspect, I think that these “new” demands require a less isolated goalkeeper that take an active part in the defensive and attacking tactics of the defensive unit.
Nel dettaglio le caratteristiche  che deve avere il difensore moderno sono:
In the offensive phase the defensive block should primarily grant covering whenever needed but also create numerical superiority in the zone near the ball. The outside defenders in turn should always support the play going up when the ball is in their section. The insertion of outside defenders always creates unpredictability to the offensive moves and, when made quickly it often catches the opposition unprepared.
The central defender plays a key role in supporting the defensive block, in that he should keep a rearward position behind the attacking action, as a diagonal back support, and be ready to help the defensive block in case of negative transition. In fact, in the case of losing the ball, the defensive block will not withdraw if the team is in a position to attack the ball at once; instead, if the team don’t try at once to conquer the ball and give space to the opposition, the defenders will be obliged to withdraw and lose field space.
In the defensive phase the “defensive block” should create numerical superiority in the central zone so as to greatly reduce the opposition playing spaces. Cross should be prevented  and marking in the penalty area could be performed if necessary. As a unit, defenders always run backwards  when in numerical inferiority, take time (to allow for a teammate recovery) in case of numerical equality, and attack when in numerical superiority. Of course, the match score and what time of the match is being played have to be considered, too.

Carolina Morace
Carolina Morace is an Italian ex soccer player, coach, lawyer, and commentator.
She debuted with the Italian National team in 1978 in the match against Yugoslavia; since then, she played 153 times and scored 105 goals, becoming the best goal-scorer in the Italian National team history, brushing with victory in European Championships in 1993 and 1997 (finalist both times).
As much as 19 years after her first match in the National team, she retired in 1997. During her career she won 12 championships, 2 Italian National Cups and 1 “Supercoppa”( ( winner Serie A vs winner Italian cup) in addition to being 12 times the best goal-scorer of Serie A. These great deals make her the best Italian soccer player of all times. In 1998, after she retired definitively from the playing field, she undertook the coaching career, training the Women’s Division of Lazio Sport Club. In July 1999 she was elected as Viterbese’s coach (Serie C1 at that time with Luciano Gaucci as President), becoming the first woman to train a professional men’s soccer team.
From 2000 to 2005 she has been coach of the Italian National Women’s team. After she had trained the Members of Parliament National team, in February 2009 she was elected as coach of Canada’s National Women’s team, with which she won the CONCACAF Women’s Gold Cup in 2010, achieving the qualification for 2011 World Championship. In two years, with her purely Italian staff, she increased the Canadian National team ranking, from the 11th to 6th position.
Since 1992, the year in which she hosted “Galagoal” show on Telemontecarlo channel, she has worked as commentator for several soccer broadcasts: besides Galagoal, she took part in “Campioni, il sogno” on Italia 1 channel in 2005 (commenting on Cervia’s matches), “il gol sopra Berlino” and “Le partite non finiscono mai” on La7 channel in 2006 and 2007, and Rai broadcasting during the European Championship in 2008.
In 2014 she was the first woman to get into the Italian soccer Hall of Fame.
She worked at the university in Roma conducting courses about soccer technique, she’s commentator for the National newspaper “La Gazzetta dello sport” and since 2012 she’s a member of the National sports observatory.
Since 2001 she’s FIFA ambassador for women’s soccer and FIFA instructor with the task of teaching soccer in developing countries such as  Jamaica; China; South Korea; South Africa, Mauritius, Iran