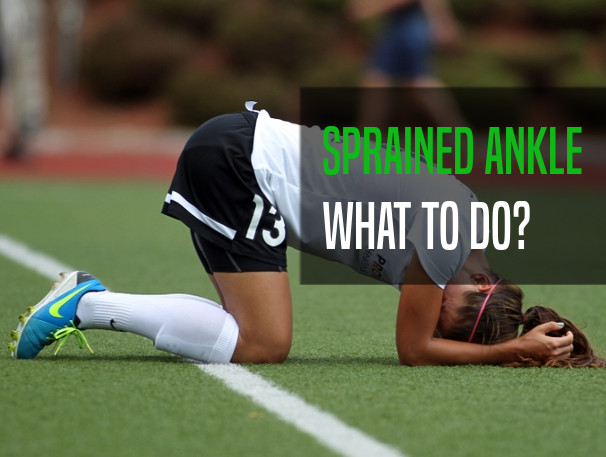 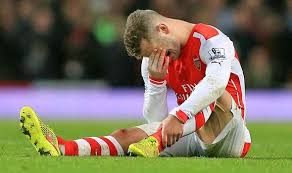 In most cases they occur as an inversion, when the foot is inverted towards the central line of the body. They affect mainly the lateral ligaments of the ankle, i.e., the anterior talofibular and calcaneofibular ligaments, but other related ligaments and structures are often damaged, too.

Mild ankle sprains have very good prognosis and recovery times are quite short; more complex sprains may even require surgery and may leave long term consequences.

Ankle sprains are very common in all sports and football is no exception. 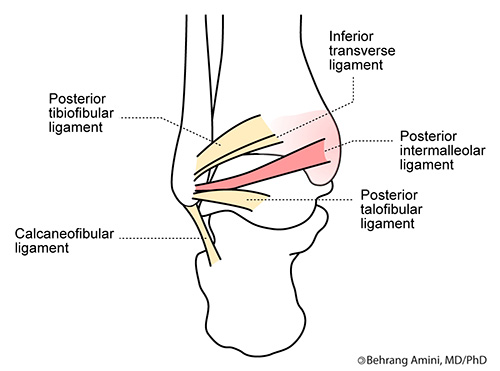 The position of the posterior tibiofibular ligament can be observed

ANKLE SPRAINS
There are 3 degrees of ankle sprains: 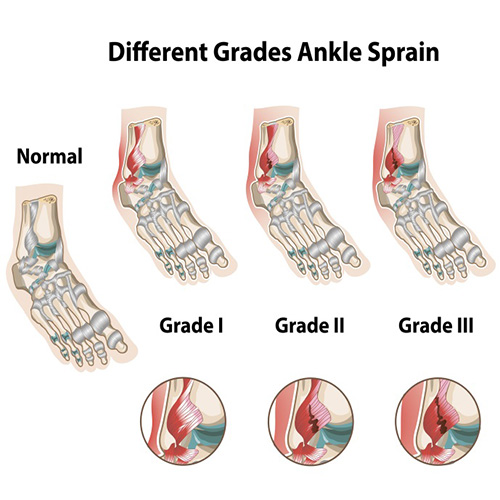 Typical signs and symptoms are swelling and pain around and under the lateral malleolus, that may diffuse along the fibula or the lateral aspect of the foot and, in more severe cases, bruising and marked functional loss are also present.

Some series of tests to be performed by expert clinicians have been established to evaluate the conditions of the ligaments. They can give an idea of the injury level, but the most appropriate test to carefully assess ligament damage is magnetic resonance, that can be prescribed only by a doctor.

Prognosis is favourable, and the return to activity can predictably be possible 4-6 weeks after injury in more severe cases. Should it be otherwise, the player should be advised to contact an orthopaedist. 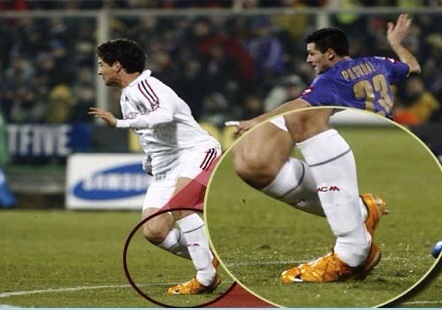 The picture shows the characteristic inversion sprain involving the lateral ligaments. As is shown in the picture, the injury often occurs without contact 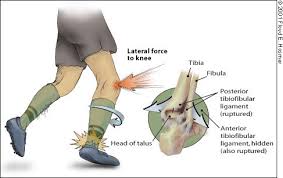 If pain after the injury is severe the player must be replaced immediately. Ice must be placed on the area and the other prescriptions of PRICE protocol must also be used (Protection, Rest, Ice, Compression, Elevation).

In case the Ottawa Rule is used and tests positively, the player must be immediately got to an ER. 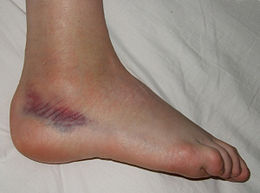 The rate of onset of swelling can be taken into account: a rapid swelling soon after the injury can point to a ligament damage; otherwise, a less immediate, more gradual swelling can indicate a less likely severe damage.

As usually, the “less is more” rule applies: a minimal, safe intervention is to be preferred to extemporised treatments that you are unable to execute.

Bruising around the malleolus as illustrated in the figure associated with pain and swelling is typical of high ankle sprains. Swelling is more marked cranially, and less marked in the medial side of the fibular malleolus.

Instability is one of the possible consequences of ankle sprains. The main symptom is a sense of having a loose ankle, that the player will likely describe as a floppy ankle.

Purely mechanical ankle instability caused by actual anatomic factors (e.g., a complete tear of one or more ligaments) needs to be differentiated from functional ankle instability, which originates from proprioceptive deficiencies  or muscle weakness.

Proprioceptive deficiency originates from the loss of a part of the receptors present inside the ligament that have the role of transmitting the movements of the articulation to the central nervous system.

Instead, the mechanisms affecting the loss of strength of the ankle eversion muscles (fibular muscles) are yet unclear.

Unfortunately, studies performed up to present days do not allow any preventive programme to be indicated as more effective than another. Little scientific evidence available shows that training exercises aimed at improving proprioception and maintaining a good mobility of the ankle can limit the occurrence of sprains.

On the other hand, significant evidence is available pointing out that this kind of exercises is useful to prevent recurrence, a very common event after an ankle sprain. These exercises should progressively increase in difficulty level and be targeted for each specific sport activity.

The proprioceptive exercises illustrated in the figure are useful in both preventing and rehabilitating ankle sprains.

The treatment is applied taking into account the actual conditions of the injured articulation and modifying the applied weight in order to ensure an optimal healing of the tissues. 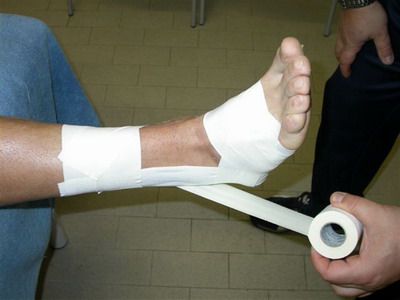 Treatment goals include recovering full mobility of the tibia-tarsus articulation (dorsiflexion is often limited after inversion sprains and this limited mobility is a risk factor for recurrences), recovering strength of the muscles that stabilise the injured articulation, proprioceptive training and a gradual return to the functional activities specific to football (changes of direction, analytical technique, contrasts). During more stressing rehabilitation phases the injured articulation can be protected with a functional bandage that has to be made by an expert professional. The protective bandage can be used also after return to activity, should the player feel this need. At a later stage the player can be taught to make it by himself if he continues needing it.

The protective bandage is an important ally in ankle sprain rehabilitation. It should be pointed out that it must be done only by an expert professional and only at a later stage (if necessary) by the player himself after proper teaching.