Intensity: a fundamental parameter in training

Playing soccer requires performing movements at maximal or near maximal speed and oft-repeated during the whole duration time of a match. Soccer is essentially an acyclic, unpredictable sport, and this feature implies that these high intensity movements be separated by relatively short recovery times.
Several scientific studies have demonstrated that the difference between high-level and low-level teams depends mainly on the continuous intensity with which the team can endure prolonged play times. This ability is labeled REPEATED SPRINT ABILITY (RSA) and more precisely indicates the player’s ability to perform maximal anaerobic, alactacid and lactacid activities with relatively short recovery times. Of course, this parameter influences the load of the training sessions, which is well known to be aimed at producing physiological changes in the athlete.
Anyway, we cannot forget that soccer is mainly a tactic-strategic sport in which the player is continuously asked to perceive-analyse-decide in relation to a given tactical context. The correct execution of the game model chosen by the coach, according to the tactical periodization, depends on the degree of cerebral and physical intensity that can be attained. Therefore, we can affirm that intensity is the true discriminating parameter of a correct training session.
Intensity cannot be separated from concentration. When we say that soccer requires intensity we refer to its complexity and its continuous need for concentration. Therefore, we can speak of relative maximal concentration, i.e., continuous concentration that allows the execution of the coach’s game model, just because the soccer player is continuously asked to think and make decisions. 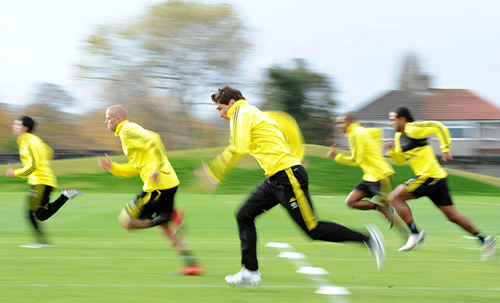 Training exercises should always have a tactic-strategic objective to respect. This objective relates to the intensity/decision concentration that occur during the action according to the exigencies of execution. We are talking about decision-making concentration. The more a player is trained based on relative maximal intensities, the more effective is his execution of complex actions. This kind of training will enable the player to be always “ready” to make decisions during the match. To conclude this introduction it is important to underline this concept: intensity precedes volume, not vice-versa: volume means only the amount of relative maximal intensities.
PRINCIPLES OF HIGH INTENSITY EXERCISES WITH A BALL
High intensity exercises with a ball should represent the new frontier for coaches today. In a tactic-strategical context the player is trained globally, by developing his tactical-technical-physical-psychological features. This is made at a high intensity level, simulating a match context.
Several studies demonstrated that a correct execution of these exercises has remarkable effective results on both the individual player and the team development.
High intensity can be measured in three different ways:

Discriminating parameters to calibrate the intensity of an exercise are:

When the coach stimulates his players continuously the average intensity of the session increases significantly. Marked increases of heart rate are recorded, and still higher increases of blood lactate concentrations.

Finally, I would like to make an important point.

Soccer is an acyclic sport that requires performing high speed movements repeated several times during the match with short recovery times. Soccer is a game that does not allow the duration and sequence of high intensity periods to be foreseen. A careful, close observation of matches will enable a coach willing to work on specificity to create a scheme simulating the activity pattern typical of a match and, on this base, to try to build up a micro-cycle made of training units in which the exercises have variable play and recovery times, as occurs in a match.
Here is another essential parameter concerning training intensity: intensity increases when play and recovery times are variable.